In 2007, Colin and MaryBeth Smith opened Roundabout Bistro in the Somersett area, which is where the Roundabout name came from, and it quickly became a locals’ favorite. In 2011, the Bistro closed so that Roundabout Catering & Party Rentals could focus on the catering and event planning business. The business quickly moved from a home kitchen to a comprehensive catering facility featuring a large industrial kitchen, a fleet of delivery trucks, a full-sized food truck and a warehouse of party rental equipment. Not only does Roundabout service clients all over the Reno-Sparks-Lake Tahoe area, but its team of experts services inspiring venues such as the National Automobile Museum, Rancharrah and the Elm Estate. 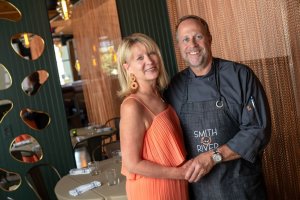 Roundabout owns and operates several business units including catering, party rentals, Roundabout Meal Prep, the Tesla Cafe at Tahoe-Reno Industrial Center and Tannenbaum Events Center. Chef Colin is the consulting chef for 14 Escape Lounges in airports across the U.S., including the Reno-Tahoe International Airport. From 2016-2020, the Smiths operated Roundabout Grill inside The Whitney Peak Hotel in downtown Reno. In 2022, the Smiths acquired a restaurant in downtown Reno and opened it as Smith and River, an American Bistro located on the Truckee River in Reno’s vibrant Riverwalk district.

Eric Rand serves as executive chef of the Cafe at the Nevada Museum of Art where he brings a wealth of culinary experience to the artisanal and innovative menu.

Chef Rand started at Roundabout during the pandemic, as the company was servicing a large hospital at the time. He started his culinary career in Catalina Island which allowed him the opportunity to also travel to more than 60 countries to pursue scuba diving, surfing and mountaineering. He relocated to Reno and was chef at several sorority houses before joining the Roundabout team.