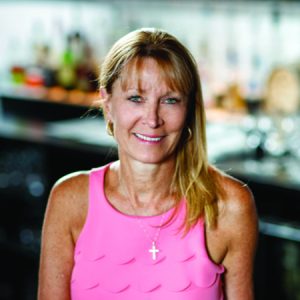 MaryBeth Smith has been in the corporate business world for nearly three decades. She is the perfect balance of ingenuity and inventiveness for Colin in both marriage and business. Helping to grow the company through acquisitions and leadership, she is the backbone of the Roundabout Catering and Roundabout Grill’s businesses.

She is also a talented designer and a stickler for detail. When it comes to planning events outside of the kitchen, MaryBeth is extremely resourceful. She will take the colors, themes, style and location of your event and bring it to life. She operates a tight ship, but her caring attitude and natural business instinct has led the company into double-digit growth year-after-year. MaryBeth treats the staff like a family and empowers her team to believe what they can achieve.

Ultimate goal: To start a foundation helping kids with scholarships.

How I spend my (minutes of) free time: Playing with our grandchildren. We also try to take one big trip every two years. 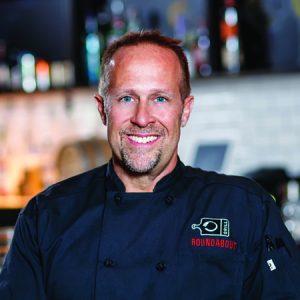 Since age 14 and following in his grandfather’s footsteps, Chef Colin Smith has seen many restaurant kitchens. Now with more than 30 years of culinary experience, Colin integrates tradition, innovation and creativity into his craft.

Colin attended the California Culinary Academy in San Francisco and began his career as an apprentice in the kitchens of European chefs throughout the Bay Area. He went on to work in notable restaurants such as Lipizzaner, Duck Club, Saros, Danville Hotel and Stars.

Colin came to Reno in 1994 and has done catering, special events and restaurants ever since. He has been responsible for opening seven separate restaurants throughout the Reno-Tahoe area, including Roundabout Grill in downtown Reno inside The Whitney Peak Hotel. In April 2017, Colin competed on Beat Bobby Flay. He appears regularly on Fox 11 Reno.

Colin is a founding chef of the Big Chefs, Big Gala event for Big Brothers Big Sisters of Northern Nevada, and has also been a member of Chaîne des Rôtisseurs and the High Sierra Chefs Association. He is an active board member of the Boys & Girls Club of Truckee Meadows, and serves as the lead chef of their annual Cioppino Feed.

Colin is trained in the classical European style of cooking which shows in his technique and approach to unforgettable cuisine.

Biggest achievement: My pride in being a dad. And supporting 25 families in my business.

Approach to service: Anticipating and being in front of the customer’s needs.